Harsh Vardhan: The journey from aviation to astrology 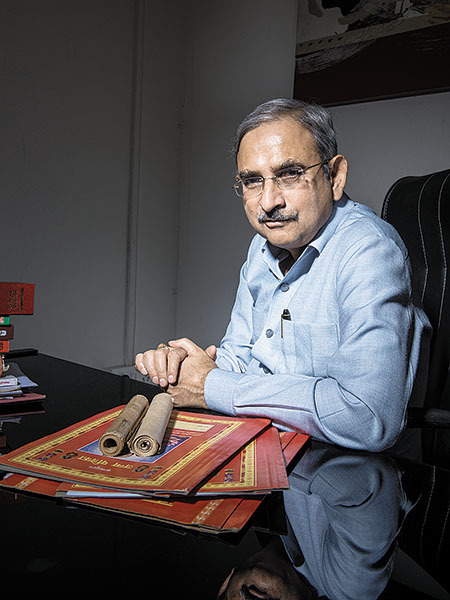 In 2013, Vardhan co-founded online astrology consultancy Shubhpuja. Previously, as CEO of Vayudoot, he helped the company navigate the aviation industry; as an astrologer he helps individuals navigate adverse planetary positions, he says

The Skype appointment had been fixed for 4.30 pm in Auckland, on the first Monday of April. A few minutes before the call, Samy Srivastava’s eyes are fixed on his wristwatch, while he wipes sweat off his forehead, and sets up his laptop to ensure nothing goes wrong. Srivastava’s job—he was a tech executive with an IT multinational in Auckland—was at stake, and he needed divine blessings. Dressed in a white kurta pyjama, and seated cross-legged—facing east—on his floor, Srivastava has, next to his laptop, a plate full of offerings: 50 gm of unbroken white rice, water, turmeric powder, sacred thread, one candle, idols of Ganesh, Vishnu and Durga, flowers, and sweets.

Around the same time in Sunder Nagar, New Delhi—9 am IST—four men are reviewing the birth charts of Samrender Srivastava (50), who had migrated to New Zealand over 15 years ago. Samy’s charts indicated that the planets were not aligned in his favour.

Harsh Vardhan (62), the group’s leader, starts on a grim note. “His sacking looks imminent,” he says. “We have to perform Baglamukhi puja,” which helps on the job front.

Srivastava is connected at 9.30 am, and as the online puja starts, Vardhan leaves the room to attend to officials from an iron and steel company in Chhattisgarh, and a TV journalist covering civil aviation.

Vardhan’s office, on the top floor of his bungalow, has a huge picture of him and actor Priyanka Chopra at its entrance. On his table are aircraft models and horoscopes. “How do you see the Jet crisis playing out?” the reporter asks. “Realistically speaking, it will soon nosedive and shut down,” Vardhan predicts.

After a few more questions from the reporter, he turns to the steel officials. “Are you ready for a bumpy ride?” asks Vardhan. The officials, who have come to understand the dynamics of running a small regional airline, are taken aback by the blunt question. “It’s a bleeding game and needs loads of patience and money,” cautions Vardhan, who was the youngest CEO to head the government-run regional carrier Vayudoot in August 1983, when he was just 27. The most crucial thing, though, is to have realistic expectations. “It’s a long-term thing. Don’t expect profits from Day 1.”

Vardhan has made a seamless transition from the aviation industry— where everything revolves around science and technology—to astrology, which claims to be rooted in science. 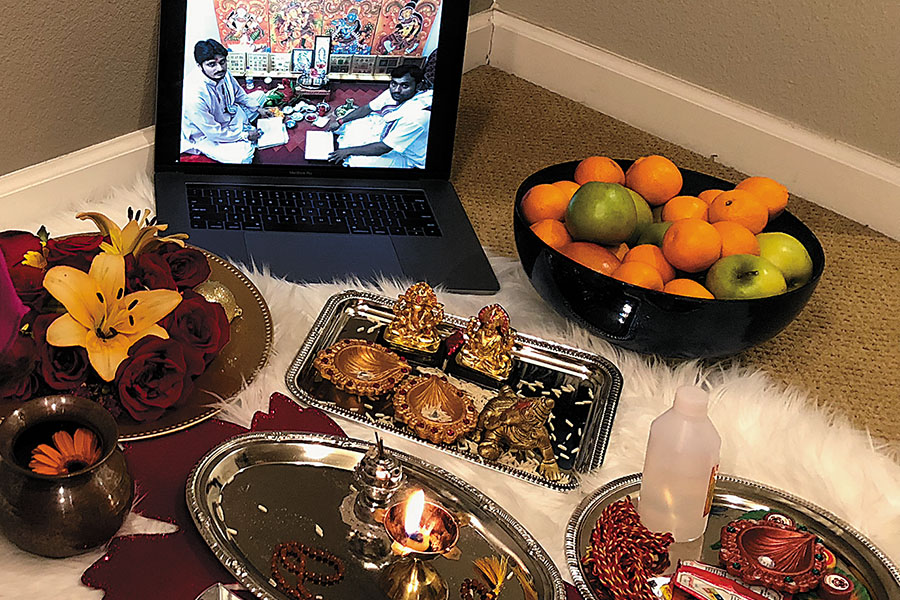 Preparations for a session of online puja

Same, but not quite
What hasn’t changed is the nature of the job. If, as CEO, he helped Vayudoot navigate the aviation industry, as an astrologer he helps individuals navigate adverse planetary positions. “I just connect the dots by examining their horoscopes,” he says, declining to explain his connect to Chopra. “Client confidentiality can’t be compromised.” In 2013, Vardhan co-founded online astrology consultancy Shubhpuja with his daughter Saumya Vardhan, who is based in the US and takes care of overseas operations.

Vardhan started his career as a market researcher at electricals firm Sylvania and Laxman in 1976. In 1980, he became executive assistant to Raghu Raj, the managing director of Air India. In 1983, Vardhan was appointed CEO of Vayudoot.

Vayudoot not only became the fastest growing domestic airline in 1986—according to an International Air Transport Association report—it created a world record by connecting 32 airports in the same year. During Vardhan’s tenure, Vayudoot pioneered domestic package tours, and rolled out night flights and night airmail services for the first time.

Today, Vardhan is surrounded by a battery of astrologers, who he directs in a manner that is reminiscent of the time when he ordered his subordinates at Vayudoot to execute plans directed by his political masters, including Minister of Aviation Khurshed Alam Khan. A one-line brief from Prime Minister Indira Gandhi, Vardhan recalls, was to connect the feeder airlines to the hinterland. “Rajiv Gandhi, too, continued with the policy of connecting the interiors,” he recounts.

In terms of his work, there is a common thread, he says: Charting out growth by removing hurdles; and both jobs are challenging. In Vayudoot, he says, the biggest challenge was to connect every corner of the country. The big task now is to ensure that individuals find a solution to their problems, largely with the help of horoscopes. “We don’t change destiny,” he says. “We just let you know how to make the most of it.” After exiting Vayudoot in September 1990, between 1991 and 2000 Vardhan had stints with Sahara and Jagson Airlines, during which he helped them set up operations.

Passion for Numbers
A small-town boy from Hassanpur in Uttar Pradesh, Vardhan developed a penchant for numbers quite early in life. While maths was his favourite subject in school, solving puzzles was his dearest pastime. “The numerology used in astrology always pushed me to know more,” says Vardhan, who maintains that the only method to test the validity of astrological influences or predictions is to use statistical studies. “It’s a science of calculation and correct tabulation.” After graduating from Meerut, he topped his class at Jaipur’s Poddar Institute of Management in 1976.

Despite his career in aviation, Vardhan managed to pursue his hobby of astrology. “My reading habit always fed my curiosity and passion,” he says.

Knowing the difference between need and greed, Vardhan adds, is the key to success. Take, for instance, he explains, Jet Airways. The airline fell prey to greed. “Jet spread itself too thin by expanding at a feverish pace,” says Vardhan. One can understand the hunger to grow, he adds, but the growth has to be sustainable. “You can’t just keep adding planes and then fight with low-cost airlines by matching their fares.”

Need, on the other hand, is what is required in astrology. You might have the horoscope of a king, but you also need to work hard to reap its benefits. “One needs to be plucky to be lucky,” he says. Auto-pilot mode, he underlines, can’t be forever; you need to take control. Astrology, Vardhan says, only helps in guiding an individual to make the most of a favourable time or tide over a crisis. “Astrologers don’t play god. We don’t change destiny. We only help you realise it without much turbulence,” he signs off.

Click here to see Forbes India’s comprehensive coverage on the Covid-19 situation and its impact on life, business and the economy​

Check out our end of season subscription discounts with a Moneycontrol pro subscription absolutely free. Use code EOSO2021. Click here for details.