The nine night of devotion to Maa Durga-Navratris 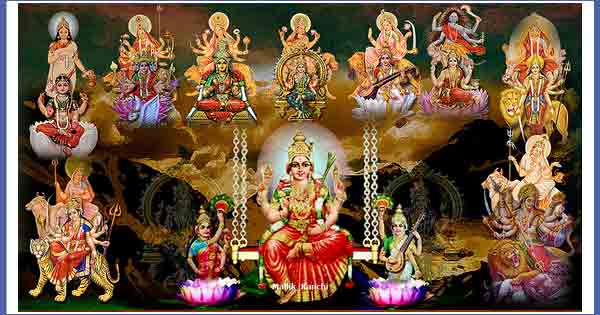 Navratris are the nine days which are exclusively meant for rendering devotion to eternal consort of Lord Shiva, Devi Durga. The nine days are celebrated to show devotion to mother demigoddess, Maa Durga. These nine days have a huge significance and the devotees can get the best benefit by getting all their desires fulfilled.

The First Three Days of Navratri

The first three days of Navratri are devoted to the worship of the Goddess Durga. This is the period, when her energy and power are worshipped. Each day is dedicated to a different appearance of Durga. Kumari, which signifies the girl child, is worshipped on the first day of the festival. Parvati, who is the embodiment of a young woman, is worshipped on the second day. The destructive aspects of Goddess Durga symbolize the commitment to acquire triumph over all the evil tendencies. Hence, on the third day of Navratri, Goddess Kali is worshipped, who represents the woman who has reached the stage of maturity.

Fourth to Sixth Days of Navratri

When a person acquires triumph over evil tendencies of ego, anger, lust and other animal instincts, he/she experiences a void. This void is filled with spiritual wealth. For the purpose, the person approaches Goddess Lakshmi, to acquire all the materialistic, spiritual wealth and prosperity. This is the reason why the fourth, fifth and sixth day of Navratri are dedicated to the worship of Lakshmi – the goddess of prosperity and peace. Although the individual has acquired victory over evil tendencies and wealth, he is still deprived of true knowledge. Knowledge is required to live the life of a humane, even though he/she is prospered with power and wealth. Therefore, Goddess Saraswati is worshipped on the fifth day of Navratri. All the books and other literature materials are gathered in one place and a ‘diya’ (earthen lamp) is lit in front of the deity, to invoke the goddess and seek her blessings. Till the time the books are kept at the puja room, the students would not study. Seventh and Eighth Day of Navratri The seventh day is dedicated to worshipping Saraswati, the goddess of art and knowledge. Prayers are offered with an aim to seek spiritual knowledge. A ‘yagna’ is performed on the eight day. This comprises of a sacrifice honoring goddess Durga as well as bids her farewell. The sacrifice or offering is made out of clarified butter (ghee), rice pudding known as kheer and sesame seeds.

The ninth day is the final day of Navratri celebrations. It is also known as ‘Mahanavami’. On the day, Kanya puja is performed to worship nine young girls, who have not yet reached the stage of puberty. These nine girls symbolize one of the nine forms of goddess Durga. The feet of girls are washed to welcome the goddess and show respect to her. The girls are offered a set of new clothes as a gift from the devotees at the end of the puja.

She is also worshipped under nine different names for the nine days in Navratri. Every day, she assumes a new character, a new look and a new duty. She is worshipped as Shailputri, Brahmacharini, Chandraghanta, Kushmanda, Skanda Mata, Katyayani, Kalratri, Maha Gauri and Siddhidatri. For the initial six the Pooja celebrations are limited to home. The celebrations acquire a festive form since the seventh day when the festivities of Navratri surround the atmosphere.

First Day Pooja
The first form of Goddess Durga is called Shailputri . She is considered the daughter of the Himalayas. She is a form of Shakti, the consort of Lord Shiva.

Second Day Pooja
The second form of Goddess Durga is known as ‘Brahmacharini’. Her name is derivative of the word ‘Brahma’, which means ‘Tapa’ or penace. She is also a form of Uma or Parvati, a form of Mata Shakti.

Third Day Pooja
On the third day the goddess is worshipped as Chandraghanta. She is the symbolic representation of beauty and bravery.

Fifth Day Pooja
On the fifth day, the form of Goddess is called Skand Mata. She is actually called so because she is here represented as the mother of Skanda, the chief warrior of the Gods army.

Sixth Day Pooja
On the sixth day, the goddess is worshipped as Katyayani. Seated on her vehicle lion, Katyayani has three eyes and four hands.

Seventh Day Pooja
On the seventh day, the Goddess is worshipped as ‘Kalratri’. As the name suggests, Kalrati is as black as a dark night. She has four hands, she is meant to make the devotees fearless.

Eighth Day Pooja
On the eight day, the Mata Rani is worshipped as ‘Maha Gauri’. She is considered to extremely beautiful, white like snow and accessorized with white colored ornaments. She represents calmness and exhibits wisdom.

Ninth Day Pooja
On the ninth day, Durga is worshipped as Siddhidatri. It is believed she consists of all the eight siddhis. She lives on lotus and is worshipped by all the Rishis-Munis, Siddhas, Sadhakas and Yogis.

To book your Navratri puja, contact us at http://www.shubhpuja.com/product/full-navratri-puja/