The shraddh for Mothers: Navami Shraddh 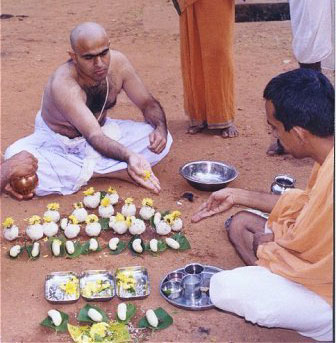 Shraddh paksha or Pitra Paksha is one of the major events of celebration as well as nostalgia for the Hindu people who remember their deceased ancestors in the fifteen days which have started from 17th of September.

Offering oblations to forefathers is the essential duty of Putra or the son which itself means that the one which shall deliver the father and ancestors from the dark regions of hell by his devotional service to Lord Hari or by following the principles of Vedic system.

Puru, Yayati’s last son, immediately accepted his father’s proposal, for although he was the youngest, he was very qualified. Puru thought, “I should have accepted my father’s proposal before he asked, but I did not. Therefore I am not a first-class son. I am second class. But I do not wish to become the lowest type of son, who is compared to his father’s stool.” One Indian poet has spoken of putra and mutra. putra means “son,” and mutra means “urine.” Both a son and urine come from the same genitals. If a son is an obedient devotee of the Lord he is called putra, or a real son; otherwise, if he is not learned and is not a devotee, a son is nothing better than urine.

The Shraddh which falls on Navami tithi is called Navami Shraddh and it is performed for the ones who passes away on Navami Tithi.

To find out the tithi on which your deceased passes away, click here

It is also known as Matra Navami shraddh i.e. the day on which the sharaddh of deceased mothers is performed whose date is not known to us.

To book your Shraddh puja, visit us at http://www.shubhpuja.com/product/pitra-santushti-sadhna-puja-with-havan/